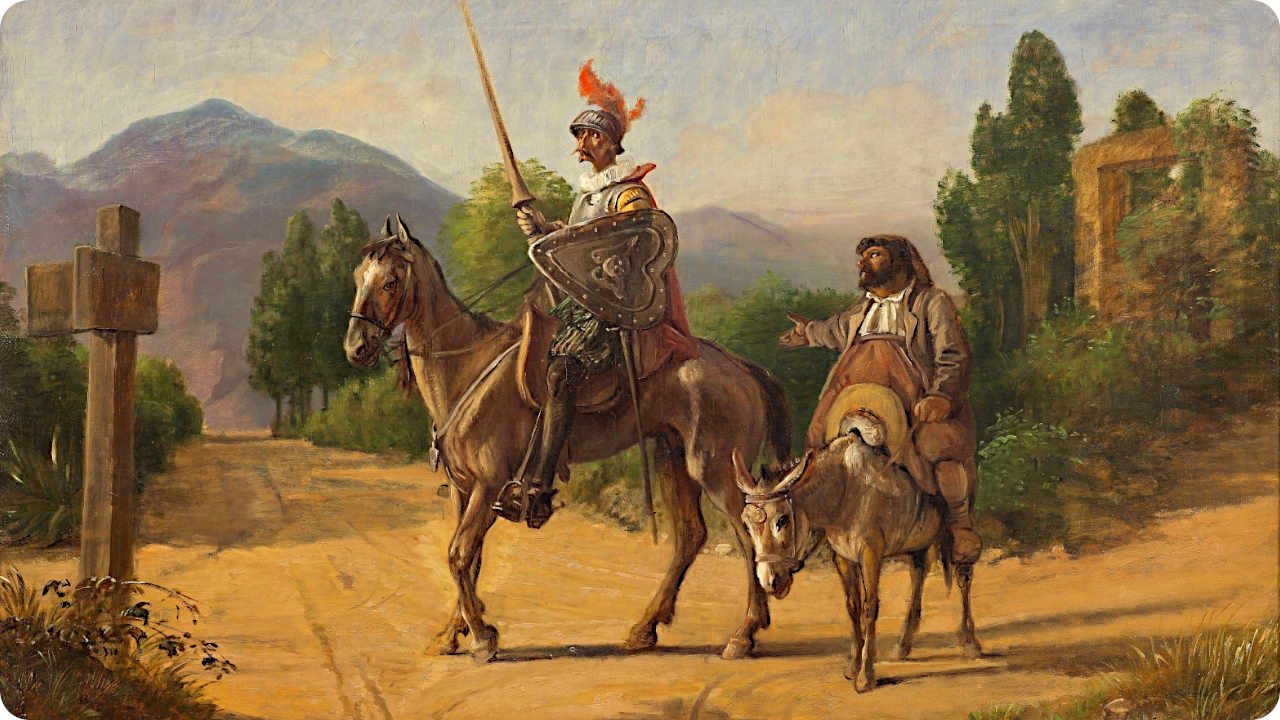 “Many people die with their music still in them. Too often it is because they are always getting ready to live. Before they know it time runs out.”

The sun is setting. With every passing moment it is sinking slowly below the horizon and eventually it fades away. And with every sunset like this we see yet another day wither away from the rest of our life. Yet another day has slipped through our hands and has drifted into the oblivion, never to come back again. The anguish of seeing your life fading away, little by little, waiting for a change can sometimes become unbearable.

But sooner or later, we get used to it. We rationalize, we compromise and then we surrender. But there is always that shimmer of hope which keeps flickering deep down in our heart like the last quivering ray of the setting sun. A dream. A fantasy. A desire to get away. A desire to leave everything behind which is ordinary and embark upon an unknown adventure. To start life afresh.

How many times have we fantasized about abandoning our mundane reality and to go on in a search for a new life? Haven’t we all, at one point or another, dreamt of escaping the unsatisfactory life we have lived until now? Do we not crave for an adventure?

But what happens when we do go on such an adventure?

The answer to that question may be found in one of the most hilarious books ever written titled ‘Don Quixote’ in which a man goes on such an adventure. The time period is early 17th century, and somewhere in Spain, an ageing gentleman, named Alonso Quixano, resolves to live his whole life in the form of an adventure. Until now he has been living a simple and comfortable life with his niece and a servant. But after reading too many fantastical books about the glorious adventures of the knights and the wizards he gives himself up to the temptations of living such a heroic life himself in which he envisions himself to be the saviour of the helpless and a punisher to the villains. He changes his name to Don Quixote, abandons his life of a nobleman, hires a squire whose name is Sancho Panza and together they embark upon a journey in search of adventures.

But the real world is no place for heroes like these. In the real world there are no dragons to slay, wizards to defeat and princesses to be saved. But Don Quixote’s conviction to live a life of heroism is stronger than reality. In passing from village to village he comes across commonplace people and banal circumstances which are as mundane as his previous life but due to his delusions he sees an army in a herd of sheep, a castle instead of an inn, a giant in the windmill and princesses in simple peasant girls. His adventures turn into misadventures. He gets beaten up by even the pettiest of crooks. In conversations he is ridiculed for his fanciful discourses. He is humoured and mocked for his antics. And sometimes taken utterly as a madman and chased away. But never in his adventures he realizes the reality of the people and his surroundings. He seems to live in a denial. A denial for all things ordinary. And he embraces all his delusions and fantasy in the most serious manner possible.

But is it not a sign of mania to recklessly pursue such an irrational dream? Is it not a symptom of an ill mind who is too weak to face reality? Like the struggling gasps of a drowning man, these actions of Don Quixote seem to be the last futile attempts of an ageing man to make his life count. A foolish attempt to manifest his dream of living a grand life which he could never have in reality.

But when has it ever happened in the real world when the dreams of men were not ridiculed for being unrealistic? Throughout the human history the dreams of men – be it of flying on the wings of metal or of transforming the chaos of electrons into electricity – all these dreams were once considered the delusions of madmen. In other words, is it not the case that the mania of Don Quixote represents that quintessential hopefulness of human spirit which, in spite of all the odds, compels us to keep moving forward? Does not his desperation symbolizes our irrepressible desire for an extraordinary life despite knowing our own ordinariness? In fact this very act of rebellion against our fate is what makes us rise above our mediocre life and to achieve greatness. This rebellion of not allowing your life to simply drift away is the way to fulfilment, of both the body and the soul. Following safe routes will never lead you to glory and a fear of ridicule will never let you produce things of beauty.

The world will laugh at us. Just like in the novel, the Duke and the Duchess welcome Don Quixote in their castle and being fully aware of his mania they give free rein to his fancies and start playing practical jokes on him one after the other. Like a court jester they reduce him to just a means for their amusement. One can see how the simple mindedness of Don Quixote acts against him in the real world. But it’s also to be noted that it’s only because of Don Quixote and his eccentricities through which everyone gets to enjoy the most wonderful time of their life in an otherwise dull castle of the Duke and the Duchess. Even if at the end Don Quixote and Sancho Panza leave the castle with their bodies bruised and their condition no better than before they still manage to resolve many a disputes and win the hearts of all the members of the castle.

Just like Roosevelt once said, “It’s not the critic who counts but the the man who does actually strive to do the deeds.” Similarly a person who valiantly forays into the unknown is the person who will have the last laugh even if he is the one who is ridiculed at first.

Don Quixote slowly gains notoriety and although many people are troubled by his misadventures his name becomes known far and wide. Even if he is not capable of fighting battles to impart justice and to redress the grievances of the afflicted, but just by his courage alone he inadvertently sets many matters straight. The people who first cursed him and proclaimed him a mad man slowly starts to recognize him as a harmless entertainer. They start to take part in his indulgences. And in doing so, for the time being, forget their own worries. Thus Don Quixote may not have become a hero, but he does changes many lives through his misadventures and does provides momentary respites to many folks from their anxieties by amusing them through his mania. Hence Don Quixote does succeed in making world a better place, not by fighting the perpetrators but by making people smile.

Sancho, his faithful squire, who at first is quite cynical about his master’s fantasy, starts to see the virtue in his master’s ideals. At the beginning of the journey he is rather a naive man with a greedy disposition but throughout the adventures he transforms into a wise and loyal friend who always stands beside his master no matter how dangerous the situations become. Their reckless stubbornness and an unshakeable belief in their cause ultimately gives them the glory they deserve. Eventually the stories of their adventures spread throughout the neighbouring regions and the name of Don Quixote and Sancho Panza become well known all over the Spain.

Even when we can see that our goal is unattainable and all our efforts will be futile there still exists virtue in going for the impossible with an unbending resolve. Just by our attempt alone we can change the world around us for better, although by just a tiny bit. Even if we can make one person smile the effort will be worth it. And if worst comes to worst i.e. if we fail completely to achieve our dream, then even our failure will serve as a proof to the fact that it’s OK to try and fail, not just to ourselves but to all the other dreamers like us. And thus in the end even our failure will not go in vain.

All stories come to an end, and Don Quixote’s story is no exception. After losing a duel after which he is obliged to renounce his profession as a knight for one year Don Quixote returns to his village disheartened. But staying away from his dream life does not do him good. He soon falls ill and after days of helplessly lying on his bed he achieves that clarity of mind which often comes to those who can see their coming demise. He realizes that it was indeed his delusions and fancies which had lead him on the path of being a knight. He calls his friends and relatives and in front of them, using strict words, condemns his own acts which he committed in his madness. He confesses that whatever he did in his delusions of being a knight was his life’s biggest mistake.

But it is exactly at this instance that all his loved ones weep the bitterest tears because they realize that now it is Don Quixote whom they had come to love and admire and not his earlier self of Alonso Quixano. If he would have kept living his life by just being his earlier self he might have been an ideal uncle, or a good neighbor, or an admired nobleman and he might have won the respect of everyone, but in reality it was Don Quixote who has ultimately won the hearts of people around him. Those same people, friends and relatives who have initially tried with all their power to break his madness and to bring him back to home now urge him to get up and go for yet another adventure. But this time his passion has departed and his spirits are fleeting. He is too close to death and realizes the futility of everything, including his much cherished dream. He orders every thing related to his dream to be disposed off – the books he read to be burned away and the armour and his weapons to be sold off. He even orders her niece to never to marry a man who has read any stories of the knights. With this clarity of mind and with a repentance for his deeds he breathes his last breath.

This last act of Don Quixote may seem surprising and sad but it would have been even sadder if instead of repenting over his misadventures in his last moments he would have died by regretting never going on any adventure at all. If he would have never stepped out of his home no one in the world would have derived the pleasure from his adventures and none would have learned the true meaning of friendship and loyalty to one’s cause which he displayed through his heroic deeds. While it may be true that on your deathbed everything seems insignificant and in your last moment all your desires, actions, successes and failures may feel meaningless but it’s also true that the legacy you will leave behind will stay in this world for generations to come. And the legacy of a life ‘well-exhausted’ always outlive the legacy of a life ‘well-moderated.’

So, what is the life lesson to be learned from the story of Don Quixote?

In short, it’s never too late to embrace your madness.