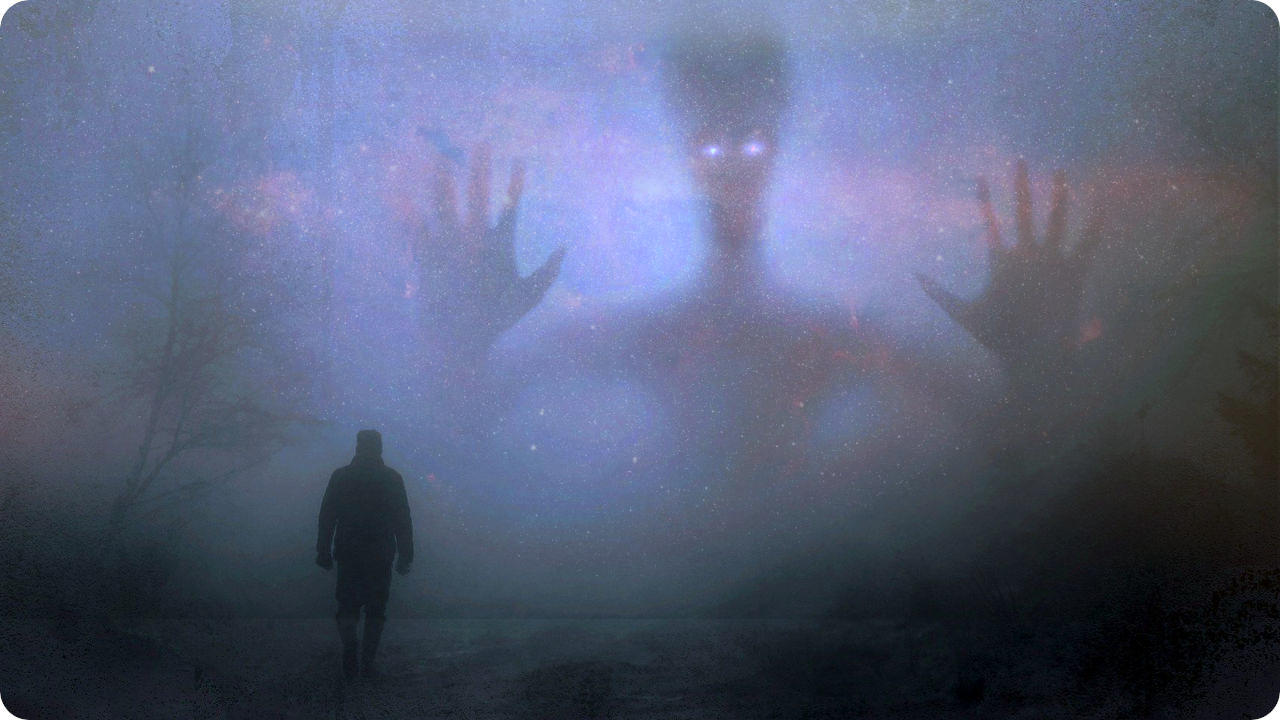 “The basis of all true cosmic horror is violation of the order of nature, and the profoundest violations are always the least concrete and describable.“

What is Cosmic Horror

There is a world which lies beyond the reach of humanity. A world where boundaries between good and evil, love and hate, being and non-being disappears. A world which is as uncaring towards human virtues as it is impartial towards human vices. In essence, this world is so indifferent towards the human existence that if a person ever manages to catch a glimpse of it in its actual form he will be traumatized to such an extent that either he will go insane or kill himself to ease his pain of insignificance. This vast, alien and hostile world is none other than our own universe and the realization of our own insignificance in this universe is called cosmic horror.

Cosmic horror is the realization that amidst this universe, which is as old as time and as big as infinity itself, lies the human race whose minuteness make it look like a drop in this vast ocean of matter. It’s the knowing of the fact that the whole human history is a mere flicker among the eternal burning flames of universe’s evolution.

Cosmic horror is the despair of knowing that humanity is just a chance occurrence among the infinite probabilities of this never-ending universe. It’s the helplessness that one feels when subjected to the reality of our transitory nature of existence.

And out of this vastness of the universe arises the idea that there may exist some god-like supreme beings or an omnipotent alien race, somewhere in this universe, against whom we are as helpless as ants are against us. Against those beings all of our knowledge, power and accomplishments will turn out be as worthless as grains of sand in a desert. It is this dread, arising out of our powerlessness and insignificance, which is called cosmic horror.

In other words cosmic horror is horror at the grandest scale. The ghosts are not limited to a cabin in the woods or an old rickety house. The ghosts in cosmic horror are huge powerful interdimensional entities against which no human ever stand a chance. So the only sane thing for us to do is to curb our curiosity and stay in our limits, and to never foray too far from our territory because beyond the precipice of our reach live these entities which can remorselessly decimate us in an instant.

Just like cockroaches can exist in the nooks and crannies of the house without ever getting noticed until the time, when in their desperation, they make their presence known to the residents by foraging on the dining table and then get themselves killed. Similarly, if humans, in their desperation and curiosity go too far into that realm where they are not welcome then they too will meet the same fate because for the entities which exist in those realms annihilation of humanity will be as small an incident like crushing an insect for a human is.

The plausibility of Cosmic Horror

What sets apart cosmic horror from other types of horror, be it supernatural or demonic, is its sheer possibility of manifestation. While we may very well discredit any notion of an old house being haunted by the spirits and we may laugh at the idea of dead people turning into zombies but we can not entirely deny the probability of cosmic horror coming into being.

In this huge universe which consists of billions of galaxies the possibility of existence of an alien race or things inhuman in nature is obviously huge. We know and have seen so little of our universe and our purview is so small that there will always be some places in universe which will forever remain unexplored. Those regions will always remain hidden from us and so does their inhabitants, if any.

Forget about the universe, we don’t have to look into the sky to know about the limits of our understanding. Our own bodily senses are so constrained that we cannot even understand what lies in front of us in all its entirety. We might as well have been living with the entities whose immensity we can not even comprehend. We are like those rats on a floating ship which will spend their entire lives running back and forth on the deck, thinking this is all there is to existence, without ever realizing that the ship on which they are residing is just a bundle of adjoined planks drifting in a vast body of water. And it’s beyond these waters, where lies the mountains and valleys and all the majestic animals which are way more intelligent and powerful than those rats can ever be. Like them we too are stranded on this earth which is drifting in this infinite stretch of the cosmos. And who knows, what lies at the end of that stretch. What lurks beyond the limits of our vision?

Cosmic Horror in literature and films

Such horror was depicted in the stories of earlier horror writers like Edgar Allan Poe, Arthur Machen, Algernon Blackwood, Clark Ashton Smith, H.P. Lovecraft and many others. In recent times we can feel the flavour of cosmic horror in some of the stories by notable writers like Stephen King and Neil Gaiman. But over time H.P. Lovecraft’s name has become so attached with cosmic horror that this brand of horror is now also referred to as Lovecraftian horror. Some of Lovecraft’s most famous novellas like ‘The call of Cthulhu’ and ‘The shadow over innsmouth’ tell the tales of god-like supernatural beings who have resided on this earth for centuries, prior to human race, and they are now sleeping deep under the sea and waiting patiently to be summoned back on the land by their devotees.

Usually in Lovecraft’s stories of cosmic horror the protagonist comes in touch with some archaeological remnant of these alien gods and then, lead by his curiosity, goes on an investigation to know more about them. But unfortunately, when he does succeed in finding those beings their revelation to him turns out to be of such horrific nature that he goes insane upon seeing them or in worst case ends up committing suicide. It is implied that just one glimpse of such beings is enough to invoke terror of such magnitude in humans that they end up losing their sense of self in an instant.

Cosmic horror has also been adapted in numerous horror movies. Some notable movies in this category are ‘The thing’, ‘Alien’, ‘Event Horizon’, ‘Annihilation’, ‘Color out of space’ etc. Majority of such movies depicts a story wherein humans tread too far in an unknown territory and later find themselves in presence of powerful alien entities. Against these entities they are so insignificant and powerless that they can not even defend themselves, much less fight against them.

Generally speaking, in most of the stories of cosmic horror humans are exposed to threats of such cosmic influence that they seem as helpless in front of them as is a crippled sheep in front of a giant wolf. In these stories humans are portrayed as mere roadblocks in the way of the supreme alien race and thus are meant to be disposed off without a second thought.

The charm of Cosmic Horror

Cosmic horror compels us to acknowledge our limits and these limits are what scares us. The fear of inexistence is terrifying in itself but an even bigger fear is the fear of insignificance. This fear of insignificance is what gives cosmic horror its charm. The realization that as humans we are, after all, nothing but a fragile pack of biological material with a limited life span. The universe, as we know it, is so big that in our lifetime we will never know everything, never experience everything and never be powerful enough to go beyond our limits. Our knowledge, our accomplishments, no matter how great they are will eventually be rendered meaningless in this grand expanse of eternity. Nothing we do or achieve will last forever.

Experiencing cosmic horror may as well be regarded as ‘an exercise in invoking humbleness’, or in other words, a ‘lesson in humility.’ It may sound masochistic in nature but treating yourself to such horror can free you from the petty anxieties of your daily life. Once you have read stories of tortures performed on unfortunate souls in some hellish world then the daily monotony of your workplace will become much easier to bear. Once you have seen movies in which a tentacled monster is eating an entire city full of humans then you will be less likely to have a panic attack the next time you see a spider creeping up on your shoulder. Once you have listened to the horror tales in which one single mistake of a man leaves his family dead then you will not freak out the next time you forget paying your home loan instalment, because at its worst it will make your family just homeless. Still better than dead. (Though I would advise not to push your luck too far.)

Cosmic horror is the horror in which things go from bad to hopeless. But like every coin has another side, there exists a counter-view to every hopeless situation. Even though we may shiver at the thought of our insignificance against this vast universe, it’s also this vastness of the universe which gives us the hope that there indeed lies possibility of existence of other beings like us, who may even turn out to be benevolent towards us. It gives birth to the possibility that this world of ours is not what all there is to life. It arouses the possibility that one day, after enough advancement, we will be able to transcend our limits. If there do exist worlds greater than ours then maybe, one day, we can make our own world as great as those worlds. And maybe, in time, we ourselves can become as powerful as the things which we are afraid of today. And it is out of our fear from which will emerge our fearlessness.